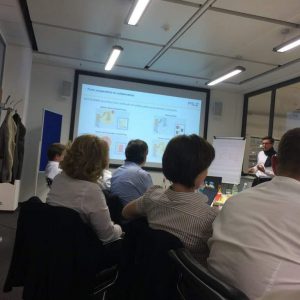 Since all materials have different dielectric properties, it is possible to adjust a capacitive sensor to detect the presence of a specific material under a variety of conditions. This makes capacitive sensors great at detecting the presence of objects (especially non-metal objects) and detecting the level of material in containers, tanks, and silos. http://www.pilz.de

Level control of powders and solids. This includes products in the plastic industry and in high temperature + viscous products like hotmelt glue. http://www.pilz.de
Cut to length measuring systems.
Level and position detection sensors in food applications. This Includes inside of ovens, silos, batching tanks, refrigerators, and oil fryers. It also includes products that have high conductivity such as ketchup, mayonnaise, and fish batters.
Leak detection sensors. This includes the Silicon wafer industry, pharmaceutical industry, and in areas where the is a risk of gas explosion like in diaphragm pumps.
Capacitive sensor design
Capacitive sensor design is highly driven by application. Most of Rechner’s capacitive sensor designs have been driven by an application first mindset.

Rechner sensors is willing to help when customers bring a market demand for difficult applications that require the sensor to be made of a specific material, have specific mounting requirements, and/or have industry certifications.

Users can install these sensors for quality control or for measuring the height of a material. Using these sensors on the side of a plastic/glass container or beside a stack of paper can warn you that you are running out of materials before they completely gone.

Capacitive probe level sensor
Unlike capacitive proximity sensors, probe style level sensors are designed specifically to be in direct contact with the target material. Once the level in your container has reached a specified height, the sensor will switch and provide an electrical signal that can be used to control your equipment or sound an alarm. Level applications often have more than one level detection requirement (i.e. high and low-level detection) or require continuous level measurement with an analog sensor. Applications for these sensors are diverse, ranging from small vessels where the height of the material only changes by a fraction of an inch – up to large filling hoppers more than 6 feet tall.

BlueTooth Capacitive Sensor
As a company we strive to deliver better products. With that in mind, we have released the very first BlueTooth capacitive sensor for level control in industrial automation.